In 2017, Starboard Foils introduced the Original foil collection that immediately set a new performance benchmark. This generation brought with it innovations such as the racing fuselage, the carbon/metal hybrid construction and the all-torx assembly system – innovations adopted today by most other foil brands.

In 2019, we introduced the revolutionary High Efficiency Geometry with the Plus generation. By moving the front wing forward, the tail wing could be set at a lower angle, significantly increasing flight efficiency and control. 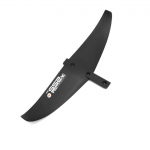